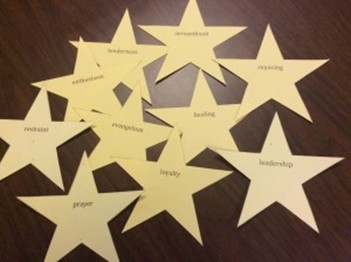 As we remember the star that led the magi to Jesus, we also have begun passing out star words this week to small groups that are meeting.

It has become a tradition in some faith communities to pass out “star words.” Maybe you’ve heard of them. Members of faith communities are given a star with a word that they are encouraged to reflect on for the year. This practice of passing out star words has grown in popularity in the last 4 years.

I am in a group on Facebook called Lutheran Leader Moms, where I was reminded of the spiritual practice. One of the members reflected on her experience three years ago when her congregation first passed out these stars and how impactful it was in her life and her church. She shared that her first word was RESTRAINT and she wanted to throw it back. RESTRAINT made her think about being held back or being bound. She thought these words were supposed to be a gift, but that did not feel like one to her. And yet, over time the word continued to work on her heart and mind. She started practicing RESTRAINT at church coffee hours and not taking doughnuts. She used RESTRAINT to stop herself from getting second helpings at potlucks. RESTRAINT gave her permission to look at how unhealthy she had become and do something about it. When she began to see RESTRAINT as a gift instead of a curse, it freed her to change her eating habits, to leave work earlier to exercise and to focus not just on her spiritual health but her physical health.

In her year of RESTRAINT she lost 90 pounds and, for the first time she could remember she was at a healthy weight. She also said that she is not one for New Year’s resolutions because – let’s be honest ­– they always seem to fail. Instead, these star words have become her practice for the New Year. Instead of making a resolution that she’ll feel guilty about a week later, She said she takes a star word as a gift and tries to keep her eyes open. The stars have allowed her to see God in unexpected ways and places. She added they have been challenging, life-giving and transformative.

In addition, she mentioned one woman in her congregation received JOY last year. Her middle name is JOY. Even though her middle name was Joy the woman admitted that she lost her JOY, she had forgotten how to live with JOY.  The star word reminded her throughout the year about the gift of JOY in all circumstances of life; a JOY that comes from the simple affirmation that we belong to God.

Lastly, this pastor mom member recalled that a man in her congregation received the word COURAGE. He was in the midst of cancer treatments when this word was given to him. He took that paper star with him to every doctor appointment. He kept the word by his side as he entered hospice care and as he passed from this life to the next.

We are going to try it this year too! We are passing out the star words this week in small groups and we will have them in a basket at the main entrance of the sanctuary (worship space). If you are not able to come into church for whatever reason, email Jody (frontdesk@bethanylc.com) and she will pick one out for you and mail it to you.

Like the magi, may these words guide us to go home by another road and celebrate God’s presence in and around us. Amen.